The Artistic Nature of Ron Kent 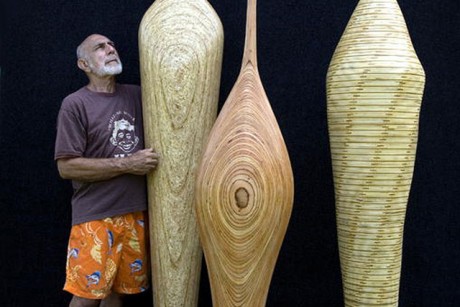 Ron Kent is an artist driven by an insatiable aesthetic curiosity that demands he transcend the tried and true by rebelling against even those trails he has himself blazed. Refusing to be limited to any particular medium, process or form, he is constantly challenging preconceptions and reinventing himself through a progressive exploration of self-expression. The constant is his embrace of the organic, whether the beauty found in the grain – and sometimes decay – of wood, or in the transformation of manmade materials such as Polyurethane Foam.

A consideration of the Vessel Series works in the exhibition offers an excellent stepping off point in understanding the artist’s work. Although they are not his initial forays into the realm of self-expression, they represent what originally made his reputation, leading to his being in the collection of a number of U.S. presidents and other world leaders. Executed in Norfolk Island pine – a wood that offers striking knot patterns and figure that result in beautiful abstract designs – these works seduced collectors and museum curators with their use of form and material.

Though totally dependent upon nature for line, gesture and coloration, there has always been a strong relationship between Kent’s Vessel Series works and abstract painting. The expanse of Kent’s bowls and his platters take full advantage of the natural formations that are often quite similar to the canvases of the Abstract Expressionists. In the case of Kent’s work however, there is also line and form, largely dictated by the natural abstraction found in a particular piece of timber. The process of revealing this organic beauty resulted in the transcendence of forms associated with function into the realm of art.

Utilizing a process of repeatedly turning, sanding and soaking the works in oil, the Vessel Series works glow under gallery lighting and, balanced on a narrow foot, they appear to hover above the pedestal. While they are stunningly beautiful and showcase great technical accomplishment, they are quite often not about the physical object at all. When illuminated and displayed in a darkened environment, they concern light and form and have more in common with Light and Space artists such as Larry Bell, than with other turned wood vessels

While these works integrated form and the woods natural beauty, works in the Post-Nuclear Series challenged this aesthetic by deconstructing the vessel. Purposely cutting into his bowls and lacing the fissures together with patinaed copper and other materials, the artist simultaneously explores ideas of repair and disrepair. This body of work initially shocked the collectors and curators who had been attracted to the classical beauty of the Vessel Series works, challenging the way he had previously been perceived as an artist. Of these works, Post-Nuclear ZO defies the seemingly sacred nature of the perfectly turned bowl form, while marrying painterly abstraction, form and concept, while Post-Nuclear 4 relates to the primitive impulse found in more recent works.

In some of the bowl and platter forms, the grain and pattern of the wood are boldly covered with paint, again courting criticism from those who came to know his work through the Vessel Series works. The Pele Series, named for the Hawaiian Goddess of the Volcano, features heavy swirls of dark acrylic paint on the exterior, suggestive of lava flow, and an interior of vivid reds, yellows and oranges, reflecting the molten lava caldera of an active volcano. While the work obviously allows Kent to explore color, the heightened sense of form created by the dark exterior is more vital to the works. The artist has frequently referred to profile and silhouette in interviews and the Pele Series allows him to heighten the sense of line and form in the work. Recent explorations combine this work with ideas from the Post-Nuclear Series with stitching, holes, and tectonic mismatches, addresses both damage and rejuvenation.

Experiments in mass such as Gestalt allow Kent to further explore the potential of pattern in wood. The stacked work bears a relationship to Constantin Brancusi’s Endless Column, yet rather than reaching for the heavens the work concerns the earth, with its ritual nature and weighty sense of stability.

The Guardians Series explores the vessel as sentinel, with shoulders rising above that of the viewer and mouths pointing to the heavens, unseen by mortals. These works harken back to the bottle forms Kent turned on the lathe from driftwood early in his career. The elongated necks of these vessels allowed the artist to experiment with the form, creating a sense that they were being pulled beyond their traditional threshold.

Untitled Wood Grain and Untitled Ublong bridge this body of work with the Apocalyptic Series – works that stand in stark contrast to his earlier explorations of seductive beauty. Consumed in flames, the wood distorts in much of his recent work in being burnt extensively to create texture and bring out the pattern of the wood grain. Further distressing the wood by working it with a wire brush, Kent creates chaotic ridges to explore the tactile as well as sculptural.

The Pele Series and Post-Nuclear Series veer toward Primitivism, while the Apocalyptic Series embraces it fully. The sculptures – stark and stripped away, are reduced to their bare essentials. If they represent an ending, they also speak the language of the beginnings of human expression, when images of Gods merged with the phallic in a direct and honest manner.

It is of interest to note that Kent lives and works in Hawaii, as his explorations – the colors of the sunset in his Vessel Series works, the charred surfaces of the Pele Series and the primitivism of the Apocalyptic Series – reflect the history and environment of the Hawaiian Islands. Yet, it is difficult to separate the impact of environment and intuition in the works of Ron Kent, as his is a world without rules or limitations, at once interior and physical. While working, he focuses upon the sensory and tactile aspects of the works in process, with the driving idea blending with the weight and smell of a work in the process.

“Many, if not most, of the sculptures I create started as an abstract idea that had to be transformed into solid physical reality just so I could see if the idea was really as appealing as I thought it would be,” says Kent who, despite the beauty and harmonious blend of form and material in his bowl and vessel forms, has always been pulling and pushing at the forms, seeking just the right amount of tension.”

“Even while I bask in the comfortable basic ‘rightness’ of the fundamental forms, I welcome the nagging discomfort of the ‘stretched envelope’ of the unexpected,” Kent has said. In recent works, he explores this sense of tension, and even discomfort, much more directly. Asteroid and Aftermath find the artist revisiting forms that he has pushed and pulled at repeatedly throughout his career, while exploring alternative materials.”

“In 3-dimensional reality the two simplest forms are the sphere and the equilateral tetrahedron (the three-sided pyramid),” Kent says. “Does this fact explain my fascination with these forms? I don’t know, but ‘fascination’ indeed is the right word, and I have revisited these forms again and again in a broad variety of media, scale, color, and texture.”

Although fascinated, Kent is not satisfied in exploring the simplicity of these forms. Asteroid, a seemingly atypical work, is created in Polyurethane Foam and displayed on an organic reed framework. It’s easy to believe that the artist sees potential in every material that he encounters.

Central to Aftermath are a group of trilons – forms that begin as an equilateral pyramid, but extend in one dimension. Still triangular in cross-section, the form reaches loftily toward the zenith, stretched out in the same manner as the artist’s bottle forms. Yet, these trilons are scarcely recognizable, as they are devastated.

While the trilon form may represent a subconscious influence of the Trilon and Perisphere symbol of the 1939 New York World Fair from the artist’s youth, his use of these forms in Aftermath is far from the Fair’s optimistic view of “the world of tomorrow” and a “Dawn of a New Day”. The work instead speaks of devastation, with five tall distressed trilons suggesting some future archeologist’s model of a destroyed metropolis.

It’s important to note that these bold new works explore what may be Ron Kent’s principal media – light. By utilizing interference paints, the works explore a complex interplay of altered and reflected light, running across their surfaces and leaping out from the cracks and crevices.